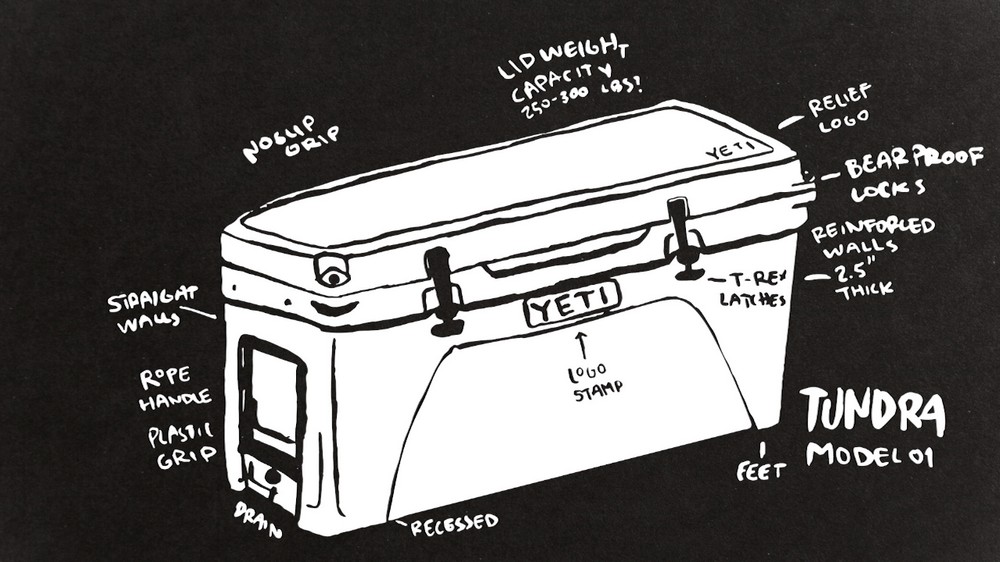 The History of YETI

The History of YETI

How much did you pay for the last cooler you bought? If you're like most people, probably no more than $30 or so. How much would you pay for a cooler? Would you pay $75 or $100? How does $400 or even upwards of $1,000 sound? If your first thought was, "No way," then you are probably new to the world of Yeti coolers.

You might not think that coolers could become an aspirational brand in the same way that other products like smart phones or cars could, but you'd be wrong. In fact, while Yeti coolers have been embraced by hunters, fishermen and general outdoors enthusiasts, they have also become a sort of status symbol alongside the state-of-the-art barbecue grill. People brag about the grizzly protection even when they live in a place when there are no grizzly bears around for hundreds of miles. Still, isn't it nice to think that if there were, you'd potentially be better prepared than Leonardo DiCaprio in "The Revenant" to ward off an attack? There's a wish fulfillment element with Yeti as there is with all popular products, but that doesn't mean there aren't great practical reasons to buy the product either.

The brothers who founded Yeti did so because they were avid outdoorsmen themselves in search of a genuinely durable cooler. Far from offering style over substance, form followed function, and Yeti is genuinely a powerhouse of a cooler. While its YouTube channel offers fun videos of how its products are tested for indestructibility, they truth is that they undergo serious stress tests at Yeti's Innovation Center that mimic the conditions under which they will be used. This includes robotic arms that test clasps, lids and zippers 20,000 times, representing a lifetime of use, and exposure to UV light, humidity and temperatures that are extremely high and low to imitate conditions ranging from the Florida Everglades to the tundra.

Today, Yeti's product line is huge and includes Rambler drinkware, Sherpa jackets, Yeti mugs and much more, and it is poised to be one of the most exciting stock options in the months ahead. Where exactly did Yeti come from, and how did a couple of guys take something as utilitarian as coolers and turn them into the flagship luxury items of an entire range of high-end products?

The Making of Entrepreneurs

Looking at the background of Roy and Ryan Seiders, it is almost inevitable that they would become successful entrepreneurs. When they were still kids, their father quit his job as a high school industrial arts teacher to make Flex Coat, a fishing rod sealant he invented that is still on the market today. Making Flex Coat in the family garage, their father took Roy, Ryan and their siblings around to trade shows with him where they were first exposed to the environment in which they would someday thrive. While their initial ventures were modestly successful, with Ryan building a custom fishing rod business and Roy creating customized aluminum boats, neither of those companies prepared the brothers to expect the multi-million dollar success of Yeti.

The first Yeti cooler burst onto the market in 2006 when Roy and Ryan decided they wanted more durable coolers that kept ice cold for a longer time. As fishing enthusiasts themselves, they were also aware that fishermen often like to use their coolers to stand on while they are casting even though conventional coolers simply are not up to this task and tend to eventually collapse under the weight.

In fact, the brothers were on a fishing trip together when they first came up with the idea of finding coolers that were higher in quality. They were also frustrated with lids and clasps that broke easily and the generally poor construction of most coolers that meant they had to buy a new one every season. Ryan spotted a cooler made by a Thai company at a trade show that seemed close to what they were looking for in terms of durability, but neither liked the design or finish. Roy actually became an importer for the company, but he found himself increasingly frustrated by warranty issues and the improvements he thought could be made. The proceeds from that business were part of what the brothers used to begin manufacturing their own cooler with the help of a plant in the Philippines. However, they found that the costs of manufacturing their premium product meant it would have to be sold at a premium price as well.

The first Sherpa coolers were priced at for $250-$300, about 10 times higher than people usually paid for the same product. Those early models were far superior to ordinary supermarket coolers though. Despite the quality, the brothers knew it wouldn't be easy to convince people to pay those kinds of prices. They traveled to trade shows and visited specialty sporting goods stores where they knew they would find their customers, hunting and fishing guides and people who were serious about their outdoor hobbies. They reached out to professional fishermen and asked them to use the coolers and record video testimonials. This was a success, and Yeti's use of YouTube remains a cornerstone of its marketing strategy today.

The Growth of Yeti

Initially, the company grew slowly. In 2009, sales were just $5 million. That all changed over the next few years. Outsourcing their manufacturing and distribution allowed the brothers to keep costs low, but by 2011, when sales reached $29 million, those suppliers could not keep up any longer. Selling a majority stake to a Manhattan equity firm called the Cortec Group permitted the company's continued growth. Under the Cortec Group, Yeti became more efficient and added another manufacturer.

That continued growth was impressive. By 2014, the brand reached $147 million as it began to diversify. However, it was not until 2015 when its brand started to become better known. Much of this was thanks to word of mouth among its hunting and fishing customer base, but the investment of the Cortec Group also gave it a more sophisticated approach to marketing. In that year, Yeti's sales were $450 million.

When the time came for Yeti to expand beyond the cooler market, its other products proved to be as high-quality as its coolers. For example, the Rambler tumbler and other portable drinkware is billed as almost indestructible. They are stainless steel and have double-walled insulation so that hot drinks stay hot and cold drinks stay cold. These stainless steel travel bottles and mugs have a broader appeal than high-end coolers and sell for much less. These products make up a significant part of Yeti's total sales, but they have also created a great deal of competition, with Walmart and other companies selling knockoff versions for less. Yeti has filed a number of lawsuits against other companies for patent infringement as a result.

Yeti also offers such products as its Camino tote bag, a durable carryall that can keep its contents safe from nails, hooks and just about any type of weather.

Why A Yeti Cooler?

What's so great about these coolers anyway? What would drive people to pay hundreds or even more than $1,000 for a product most people think of as an inexpensive container to keep their drinks cold on a hot afternoon besides wanting to stand on the lid or ensure their doesn't end up in a grizzly bear's stomach?

There really is nothing quite like a Tundra, Yeti's line of coolers. Its largest model sells for $1,299 and is advertised as being able to hold up to three elks, an invaluable capacity for the serious hunter. Every cooler has walls and lids that are two inches thick and contain industrial-grade insulation, a welcome feature for anyone who's ever sat around on a hot day pulling what were supposed to be cold drinks out of a slush of fast-melting ice in a conventional cooler. People on multi-day outdoor trips in conditions of extreme heat or cold need to be able to reply on their coolers, and Yeti's coolers have been designed and tested for precisely those conditions.

While the coolers are designed to last, there is always the possibility of issues such as a part getting damaged by an animal or in an accident. The parts that are breakable can be replaced.

Yeti's success may be fueled by timely investors and clever marketing approaches, but the bottom line is that the company is thriving because its products are the best out there. The company continues to go from strength to strength and it is likely to continue being a top name in innovative products for years to come.

Speak to a Human!